Take One
Let's talk about NYC. No, not New York and Company, although they do have a decent selection of business casual attire but let's be honest, it's a bit overpriced, don't you think? I'd much rather be blindfolded and pushed into Forever 21 forced to feel my way to a decent outfit than to pay anything on NY&Co.'s clearance rack that was probably up-priced first and then glossed over with a deceptive sale tag. Also, everything I just said might be (and probably is) entirely false.

Take Two
Anyway, back to New York City, the city that never sleeps. P.S. I adore sleep and think it's depressing that a city prides itself on refusing a fundamental necessity that keeps people sane, level, alive. Don't get me wrong, I love the city despite this minor flub, but how about something more like: "New York City, the city that naps like hell to stay up all night." It's a win-win, right? People love naps and they love to party so I guess what I've just done is I've spoken for the people. You're welcome, people. 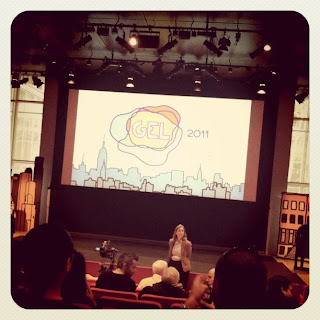 I went to New York City to attend GEL for the third time. A huge congratulations to Mr. Mark Hurst who put on another fine show of inspiring, intelligent, thought-provoking speakers who made your heart swell with adoration, which then turned to jealousy, and then finally depression because you realized your life pales in comparison to their awesome genius and creativity. So...thanks? But seriously, I truly had a great time and really enjoyed soaking in every detail, every experience, every nuance I could to take back with me to Maryland (to share with Carebear). With that said, I wanted to take some time to deliver some personally-a-la-Kimi-crafted GEL 2011 Superlatives, yearbook style, of course.

Best MC - Mark Hurst
I echo everything documented by this GEL attendee and additionally appreciate Mark's natural gift of speaking, his delivery, and his comfort in engaging a diverse crowd of people in such concentrated creative experiences.

Best Improv Performance - Paul Hurst (Mark's dad)
On GEL Day #1, I attended the Improv workshop with Cathy Salit from "Performance of a Lifetime". Eight people volunteered to perform their life in one minute in front of the large group. Paul gave a very charming and humorous performance depicting him as a midshipmen at the Naval Academy, graduating, yet just as green to take on life as he was the first day of his induction.

"I'm not crying, I have something in my eye" Speaker - Daniel's Music Foundation
An amazing story of 26-year-old Daniel, who suffered a brain aneurysm at 12-years-old, was confined to a wheelchair for two years, and now walks on his own. Music played a huge part in his rehabilitation which prompted him and his family to start Daniel's Music Foundation. Daniel's "Thank You" song had me gulping back tears.

Best Take Away Message - Nell Minow, Film critic, Corporate governance expert
I love failure stories because they imply mistakes and room for improvement. And they make me generally feel better about myself.

Most Interactive Speaker - Nicola Twilley, Author
It's funny to think that for a group largely introverted, we shared pieces of paper with each other that we had previously smashed our noses against. I think that's how you really get to know each other.


Most Ridiculously Good Looking Couple - Johnnyswim, Music artists
Seriously, do you have to be this good-looking? C'mon, that's just not fair.
Most Ridiculously Good Looking Couple with Ridiculously Awesome Talent - Johnnyswim
Oh, so you're hot and you're talented. Let me guess, you turned down a modeling contract to pursue your dream of performing. Oh. You actually model on the side when you're not on the road? Well, that's just perfect.

Worst Audience for Johnnyswim to Perform in Front of - GEL (all white people with sprinkles of ethnicity)
Think high energy, Latin-infused, hip-swaying caramel-toned goodness playing to a crowd of paralyzed nerds. Can I get a clap, people?


Best Speaker Thumbnail Photo - James Chan, Venture Capitalist and Entrepreneur
Because it looks like he was in the middle of talking when someone snapped this photo and hit send right before the GEL speaker photo deadline.

Most Mind-Blowing - Vi Hart, Inventor, Author, Mathematician
I tried really hard to walk away from Vi's mathematically-composed music presentation enlightened, intellectually stimulated with hopes of maybe developing a pretentious English accent, but I quickly realized after my brain exploded a little that I'm just, well, dumb.

Most Endearing - Alicia Hansen with Devin and Christian, NYC Salt
I met Devin, one of the NYC Salt's photography students, during GEL's lunch and was immediately drawn to this bow-tie-wearing, baby-faced high schooler. He's only 17 and has accomplished more than I have in my almost 30 years. I'm not jealous at all that he's going to SCAD with a more than handsome scholarship, or that his photography portfolio was one of a select few that was nationally recognized. Soooo not jealous. (Seething with jealousy.) What's truly amazing though is that he and Christian are the first in their families to go to college, so seeing him on that stage sharing his story made me feel like a proud blubbering mama desperate to shout out, "That's my baby!" Thankfully, that didn't happen.

To view all the speakers and contributors to the conference, check out GEL, as I didn't reference all of them here. Also, check out more refined reviews here and here, and my photos here.
Posted by Kimi at 11:13 PM