As many of you know, Lappy T was sick for some time and doomed to die (read his story here). He eventually did die but not because of natural causes. To this day, after talking to the mailman and writing some stuff in my diary and trying to figure out how to play that computer game with those smiley faces that turn into bombs, I still don't know what happened that day I found him shattered into pieces in my driveway. I know that Lappy T would have wanted me to be happy with another Lappy T. So I went to the cyber store and picked out a brand new Lappy T, who, after much thought, I decided to name Lappy TT. (Because it's my second laptop and I added a T to the first T. Get it?)

Anyway, Lappy TT is a lot bigger than Lappy T. He is shinier and faster and has one of those built in camera mirrors. Honestly, he doesn't talk that much. And when he does it's in a weird high voice with all these big words I'm not really used to but I want to make a good impression so I just tell him 'sure' 'yeah' and 'anything really' whenever I don't understand what he's asking. (My mom always taught me that the customer is always right.)

One day after work, I decided I wanted to try out the camera mirror to take a picture of my new haircut. I hadn't talked to Lappy TT in awhile so I decided to strike up a conversation.

"Hey, Lappy TT." I said.
"It's Veronica," Lappy TT said.
"Sure," I said.
Lappy TT let out a long irritated sigh.
"So...do you like my hair?"
"Hm," Lappy TT paused. "It's a little eccentric, don't you think?"
"Uh, yeah," I said. "Anything, really."
"Excuse me?"
"Nothing. So I wanted to take a picture of myself to send to some of my friends. Can you start the camera mirror?"
Another long sigh. "I suppose," Lappy TT said flatly.
"Great!" I smiled as the camera popped up onto the screen. "Wow, I look awesome!"
Lappy TT snorted. "Oh, really?"
"Yeah!" My eyes were wide in amazement drinking up the screen.
"You're being facetious, right." Lappy TT  said. When I didn't answer, he continued, "You know, you aren't actually looking at yourself, right? It's just a sample picture that the web cam provides."
"Web cam?" I repeated.
"The camera built into me. It's called a web cam."
"Sure." I nodded.
"Anyway, that sample picture is of Taylor Swift. How on earth could you think that was you?"
"Oh yeahhhhhh...I thought she looked familiar..." I trailed.
"You're completely serious right now. Wow." Lappy TT's voice had grown softer.
The picture on the screen finally switched so that my own face appeared.
"Ah! I see what you were saying just a second ago." I affirmed. "This is definitely me this time. I see because as I'm saying this I can see my own face saying the same thing back at me. This is awesome!"
"Let's--just--get this over with," Lappy TT said.
"Oh, you have somewhere to be, huh," I looked at him with a smile. "Hot date? Who's the lucky girl?"
"Who's the lucky girl?" Lappy TT repeated.
"No, I just asked you that."
Silence.
"Smile." Lappy TT commanded. So I did.
Lappy TT told me that after he took the picture, the camera no longer worked. I told him I would do some research on fixing it. He said, "If you find a resolution, then admit me into the nearest insane asylum." I told him I don't traditionally make resolutions for the New Year but I'd think about it. In the meantime, I made the only picture he was able to take (see below) as my background image so we can look at it all the time and be reminded of this great memory we experienced together. Sometimes I'll come home and a different picture is there instead and I'll find the one he took in the recycle bin somehow. I always get it out of the bin and change it back to the same one. Always. Until next time... 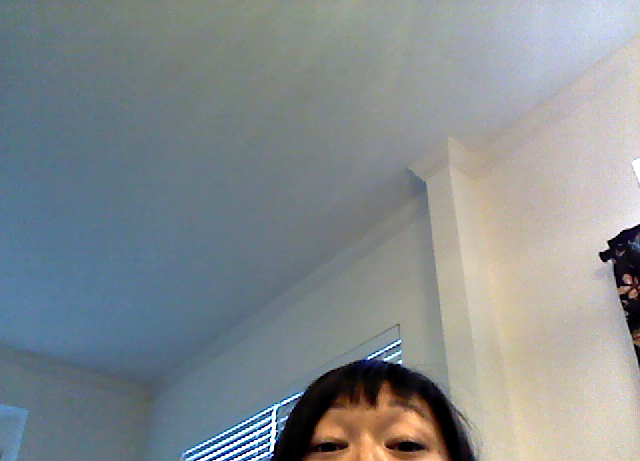 I've said it before and I'll say it again...So freaking funny!

lappy tt has an attitude huh?! kind of reminds me of someone I know... :)