I might have joked with my Mom that I was pregnant over the phone on Thursday morning. Believe me, it was necessary. She, like my Dad, were the only ones of my friends and family who knew of my pending engagement, and when only your parents know and are anticipating this very announcement, I think it's fair for the bearer of news (me) to have the liberty of presenting that information any way he/she pleases with his/her own elements of surprise. And oh, surprise was served. But of course, not a second later I was delivering the real news that I was really pregnant with JOY over my engagement to my very best friend and love, Robbe Reddinger.

Quick last name pronunciation lesson:
The "g" in Reddinger is silent like the word "singer." Or like the late Otis "Redding" and add "er" to the end.

Short related story about "Reddinger" pronunciation:
I used to think for a long time that Reddinger was pronounced with a hard G sound. I remember sitting at the Reddinger's dinner table and his mom was telling a story and she said, "I saw Mike today and he said, 'Hey, Mrs. Reddinger,'" and she pronounced it with a silent G and I thought to myself, "Why is Robbe's mom pronouncing her own last name wrong?"

So, pre-Mom & Dad and family and friends announcement phone calls, Robbe and I had woken up in Brooklyn at my dearest friend Emily's lovely apartment and decided to take a morning stroll to the Brooklyn Heights promenade which overlooks the BQE (Brooklyn Queen Expressway)--significant for other reasons (see Halloween 2009)--the East River, and lower Manhattan with the Brooklyn Bridge to the right and the Statue of Liberty to the left. Why I had never seen or heard of this before, I'll never know. 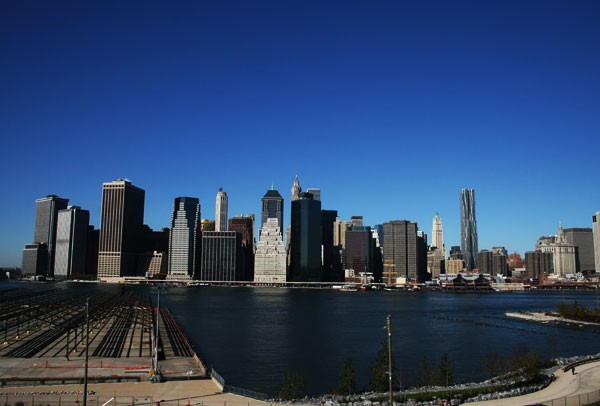 The morning was truly spectacular (as was every morning subsequent to our stay in NYC). It was nearing 60 degrees (in November, mind you!), sunny, a brisk fall breeze, great company. Before we left, we had debated whether or not to grab some food, which Robbe knows is extremely important to me after I wake up. When he suggested we walk first and get food afterwards, a bit of suspicion struck me as he usually could care less about making that kind of decision (I usually just ask to appear courteous) and also because he never passes up an opportunity to eat even if he's not that hungry. I quickly put the suspicion out of my mind as quickly as it entered as I was led to believe that nothing engagement-ish would happen for at least another six months. I knew it. He knew it. Friends and family knew it. Done. Suspicion deleted.

After taking a few pictures, we took in the view from a nearby bench and started to talk about our future together. It was more funny than serious as we exchanged some of our concerns of the other's idiosyncrasies compounded over time but it was of course, very sweet nonetheless. After affirming that regardless of these things, we would still love each other, he said, "I guess there's one thing left to do then." And that's when I think I froze, perhaps blacked out, stopped existing, peed without knowing, whatever, I'm not sure. There was some movement from his arm into his pocket but I didn't dare look down. I heard the words, "Will you marry me," and I covered my sunglassed-hidden face. I had just put on a fresh face of makeup and now I was about to resemble a Picasso. I think the phrases, "What?!" and "Are you serious?!" were quite popular right then and after wiping my face a little I finally looked down at the ring. Gasp! "Oh my gosh! What!" How did Robbe know how to buy a ring?!
"Wait," I heard him laugh. "You haven't answered yet."
"Oh, yeah, YES!" I cried. And then I cried some more. And then we both looked at each other with this shared understanding like: 'We have no idea what this means or what happens now (I guess marriage) and saying we're engaged is like saying we're cats or robots because it's so foreign and weird and unknown but I guess what matters is that we love each other and we're about to change each other's lives forever and we're okay with that.' Yes. It was some look. 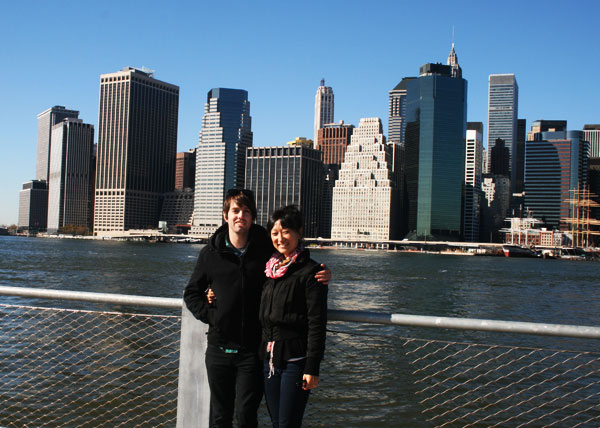 Do we have that engaged look in our eyes? Or are we just gay? 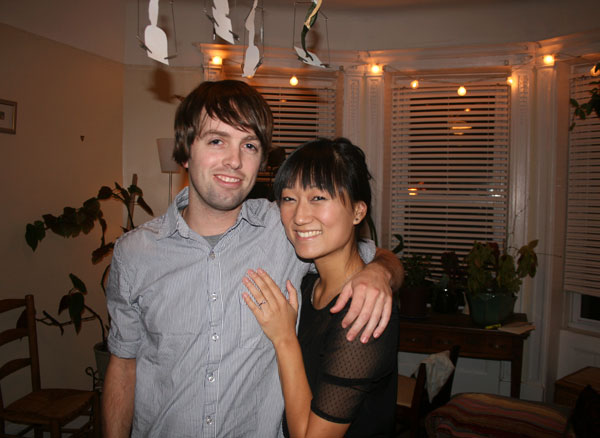 At Emily's apartment before our celebratory dinner at The Place, Greenwich Village
Thanks to everyone for all the amazing engagement wishes and love. It's all still sinking in (and probably will be for awhile) but I feel incredibly blessed and humbled to be in this place. And of course, a huge thank you to Robbey Reddinger for his love that is my present and future.
Posted by Kimi at 7:59 PM

Woohoo! Not only do I get this happy news about your engagement... I now have the link to your blog :D Looking forward to more of your stories. Oh, and it only gets better from here :)

The whole thing makes me smile so much, but especially THIS: "'We have no idea what this means or what happens now (I guess marriage) and saying we're engaged is like saying we're cats or robots because it's so foreign and weird and unknown but I guess what matters is that we love each other and we're about to change each other's lives forever and we're okay with that.' Yes. It was some look."

Very happy for you both. Much love!

Congratulations kimilicious. So happy for your fairy tale ffugmasst ending. couldn't have happened to a nicer ffugmasst couple :) kisses blown from Astoria in your general direction.

thank you friends! Chloe, thanks for the ffugmasst love. I am so glad you are living the sweet NYC life with your special chef of a man! <3