If it weren't for Bob and Cathy, Robbey Redd would not be here today celebrating his 28th year of life. If you don't know Robbey, you probably should. He's what I like to call a "prih goo guy." But that's a whole 'nother story. 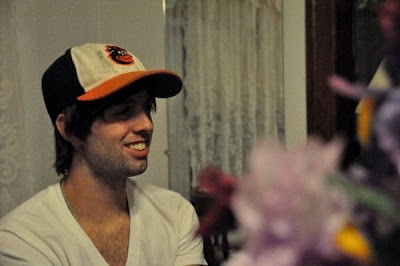 1. He only eats once, maybe twice a day. And sometimes it's old pizza from a dumpster when he's on tour. I'm not judging.

2. He slaps dee bass in a band but generally hates talking about it so if you're going to make conversation, it's best to stick to sports, namely, the Orioles, Steelers (burp), or fantasy anything (that doesn't sound right).

3. His eyes go down like Hugh Grant's. Mine go up like Asians. If we were to procreate, our child would probably have level eyes.

4. He's generally a mumbler/low talker in conversation. The only time he's not mumbling is when you're actually supposed to mumble, like in church. He thinks he's whispering when really he's talking in a completely normal voice. So everyone in our row usually knows exactly what he's thinking or observing throughout the entire service.

5. He can grow an impressive handlebar mustache and talk passionately about how to properly care for one. This is usually done while on tour when I can't actually see him because he knows how much this generally creeps me out. Such love between us.

6. Under conditional circumstances, you may find Robbe karaoke-ing songs from Weezer, the Gin Blossoms or dueting "Your Love" by The Outfield with one of his best friends. It's a must-must see.

7. Robbe's dream is to live on a boat and sail around the world and surf with, no, not me, but his best friend David. I just can't compete with David's tall, dark and handsomeness.

robbey might have a little competition with my mom for the love and friendship of one Cal Ripken Jr.