On Saturday, Emily and I decided we would take a whimsical stroll around Manhattan with the hopes of
1. getting a haircut
2. finding a cute dress
3. buying cheap sunglasses 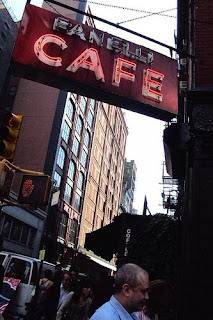 While on our mission, we had lunch at a cute restaurant in SoHo called Fanelli Cafe where we, without a choice, befriended a fellow patron who sat beside us at the next table. I admit, I knew from the moment we made eye contact through that restaurant window that she was going to make our afternoon undeniably interesting. What was it that led me to this conclusion? Maybe it was her roller blades or her helmet or her accompaniment of unwieldy shopping bags that abruptly broke the bar's steady hum of eating and conversation. Maybe it was her determined expression that met my gaze for four or five seconds too long. Maybe it was the definite sense of longing that quickly translated into: "I'm a needy person."

Before even sitting down, she was already interrogating one of the waitresses:

She plopped down beside Emily, our tables inches away from each other. Emily and I felt her obvious stares but continued our conversation with more consistent gulps of beer. It wasn't but a minute or so when the girl started waving her arm towards the waitress who just sat her. After a few seconds we heard her inquire, "Is someone going to come over here?" I didn't turn to look at the poor waitress's face.

As we were nearly finished, the girl turned to us and asks with an accent: "Did you have the burger?"
"I did," Emily says.
"Was it good?"
"It was very good. Heavy, but good."
The conversation transitioned into what we were doing in New York. We explained our separate stories and she told us she was from Lebanon and came to New York for school in hopes of transferring to NYU.
"I have no friends," she says. "I'm trying to find friends."
"I'll be your friend," Emily says quietly. My heart dropped and I realized Emily is the nicest person I have ever met.
"Really?" the girl, whose name is Vivanna (or something like that), says. "Well, do you like adventure and suspense and stuff like that? Like, I like roller coasters."
Emily laughs because she just described the complete opposite of herself. She would take a book and cheap wine any day over anything remotely adventurous.
"Um, no I don't," she says and then points to me. "But she does. But she doesn't live here."
We then, for the next five minutes, give Vivanna a pep talk about how to make friends by joining club groups that are centered around roller blading or other niche sports or interests like "suspense" and "adventure."

As we are finishing up our conversation and paying for the bill, I looked outside the window and saw a guy with a gray over-sized beanie talking to another guy. I did a double take and realized he looked just like Channing Tatum. I looked again and realized that it's him, Channing Tatum. And he definitely noticed me looking all three times. (Channing Tatum is in G.I. Joe, Dear John, and Step Up.) I'm shocked that no one is bombarding him with autograph and photo requests. As we exited Fanelli's Cafe, a few others were mingling around waiting for an opportunity to snag a personal photo. We paused for a minute to employ this same idea and as we did I noticed that 1. he had the beginnings of a very scary mustache 2. he was a lot taller than I thought; on TV he looks like he's 5 "8, 5 "9 but he looked well over 6 feet. 3. Whatever conversation he was having looked like he was trying to comfort a discouraged friend.

So, due to #3, we decided to leave Channing behind, missing the opportunity for him to meet us. Sucks for him.

Later, while on some other side street, we ran into a filming taking place. At first we thought it was a no-name production until we looked closer and realized it was Michael C. Hall (Dexter). After scoping his work on IMDB, I think it's for an upcoming film called "East Fifth Bliss." 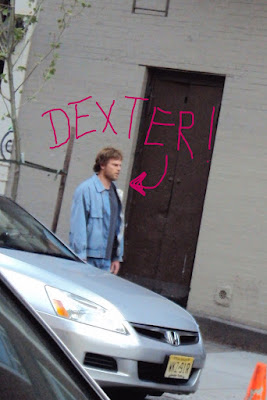 We finally got our haircut here: Dramatics NYC
We bought some home decorations here: Pearl River
There were no sunglasses purchased nor cute dress. :(

While turning onto a street, we heard this loud, piercing screech which sounded like the tires of a bike or something. We turned around to see an older man passing by on his bike, the screeching sound coming from his mouth, yes his mouth, not his tires. And his face was a pure smile, like this was his thing, his enjoyment, his livelihood to fake like he was screeching to a halt to innocent passerby-ers by making a horribly high-pitched noise.

"I thought a dolphin had landed in NYC and was riding a bike," Emily said. We then agreed to make that noise whenever we were nervous from that moment on. 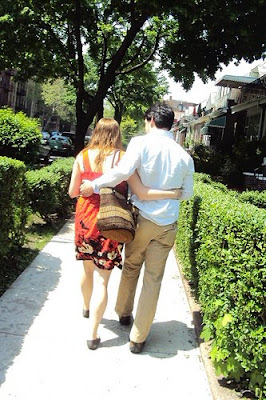 Emily & her sweet Chris (aka Marco) 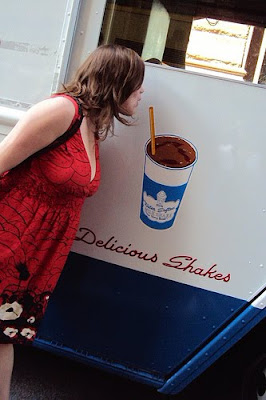 Does Emily know this isn't a real milkshake? 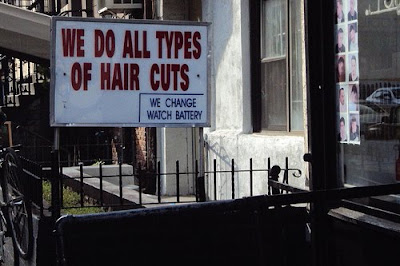 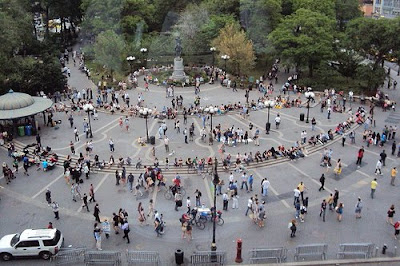 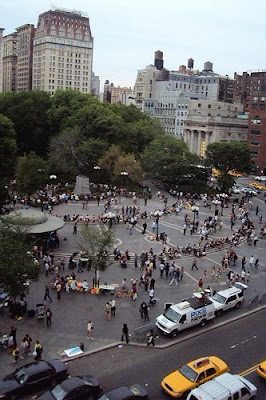