After purchasing a two-foot tree this past weekend at Target (which I was self-admittedly too excited about given it's not even Thanksgiving), I attempted to persuade Robbe into believing the magic of pre-Christmasing. Whether or not he really set his heart to my own tune of pre-holiday wonderment, he did an amazing job playing along--which is why I am unequivocally, positively, 100% Team Roberto. Here's how the night unfolded...

I had bought a few ornaments at a school fair a week or so ago, which was the real reason behind my premature tree purchase. I now owned two hand-sewn sheep--one black and one white--and three handmade doves with bells attached to their bellies in green, red, and blue.

"Let's decorate the Christmas tree!!!" I smiled at Robbe (with a crazy look in my eye). It might as well have been Christmas day; that's how excited I was.

After comparing my excitement to our workload Robbe gently said, "Okay but it's probably going to take three minutes." Well, he was right. But that didn't stop pre-Christmas wonder from happening. 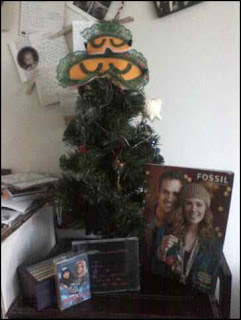 As we slowly placed the ornaments on the tree, Robbey pulled up a fireplace app from his iPhone so we could hear the whistle and pop of the virtual fire. Then he imported Christmas songs from a music application. Pretty soon we were singing Carol of the Bells (but the Family Guy version "Ding! Fries Are Done!") while positioning and repositioning the tree; trying to find more suitable decorations around my room. We strung buttons together with twine into a long necklace that wrapped around the neck of the tree; Robbey took a couple buttons and hung them individually. I took my two sleeping masks that Raych Arles had made for me and Carebear for my birthday and used them as a a star-topping focal point. We finished the display with a few supporting present-esque items like, Farewell Flight's CD, the Waynes World soundtrack on cassette (thank you Raych Arles), a giftbox, and Fossil catalog with happy Christmas models on the front that I got as a handout at the mall. 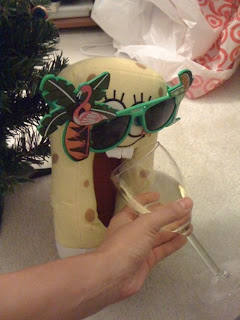 Robbey went to the bathroom and came back with his socks soaked from unexpected water on the floor. We draped them over my trashcan while the fireplace app crackled in the background.
We then proceeded to play the rims of our wine glasses (seriously), had a mini dance party (only me), dressed up my Spongebob slipper with some sunglasses, and had a legitimate, Friday the 13th bewitching time.

No picture of the PRE-Christmas wonderment?!