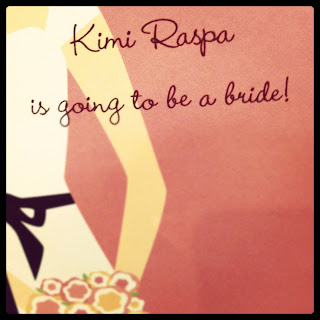 Received this sweet bridal shower invitation in the mail today and thought "suckerrrrr!!!!" after reading it. But seriously, I'm honored to be surrounded and supported by such a sweet group of older ladies (aka Mom's friends) who will probably end up praying over me thus making all my shower pictures a complete disaster because I'll be weeping the entire time which will result in a thorough mess of smeared makeup and someone will tell me "Oh, it doesn't look bad!"* when in reality I'll be so unrecognizable that people arriving late will introduce themselves to me and ask me: "So, how do you know Kimi? Are you her biological brother?"

On the bright side, I'm thankful that this invitation didn't have "zilla" at the end and wasn't written in the present tense, although I still have four months to go before I'm officially in the clear of assuming that title.
Did someone say four months? I think a bottle of wine is calling my name. And what's really weird is that it's referring to me as "mommy."