Words & Photos_CPR for Your Summer Wardrobe

It's almost officially summer. So why am I wearing the exact same clothes I wore in the winter?

I don't have the money to spend on a wardrobe right now. (Conscience: But Kimi, what about all those happy hours and lunches and dinners you went to last week and the week before that? Why don't you use that money towards new clothes?) (Me: Shut up, conscience, you're nothing to me!)

Shopping at the mall right now is equivalent to shopping for a training bra. You see things you need but it doesn't exactly excite you or make you feel genuinely good about yourself. It's a purely economical purchase, void of any intoxicating shopping high which is, of course, part of the magic of shopping in the first place.

Maybe you feel the same way I do. Maybe you don't. And for those who don't, I hate you. Go be bffs with my conscience and do each other's hair and run away to Mars together. Haha, guess what, you can't go to Mars, it would cost a million dollars so joke's on you. Oh, you have a million dollars? Son of a!

Anyway, back to me. If you're feeling like your wallet's on a budget and you're feeling plain, poor, and pathetically un-hip, here are my three morsels of fashion wisdom. Remember, people, they're morsels. No profound tips here. I'm no fashion expert. I'm just offering some cheap alternative ways to spice up a wardrobe on its last breath.

1. Hey, shorty!
Right now it's all about cut off and cuffed denim shorts. I do not have the latter. What I do have is a nice pair of cut-off denim shorts, which I know sounds like I'm from 1985, but they've become a staple for me when I'm lounging at the beach or even when I'm going out and need that one piece to give a nice outfit an indie edge. So where did I get this staple item? Nordstrom? F21? Macys? No. My forgotten pants drawer. I resurrected them with some magic fairy dust and then chopped those suckas up. Now, here's how to make your shorts a fringe* different than the others. I cut them so they were a few inches longer than a normal pair of shorts. 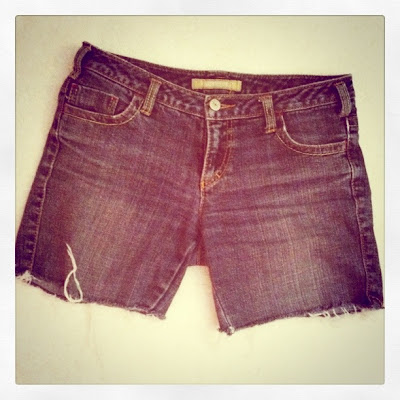 Then, I rolled them up once as high as they could go... 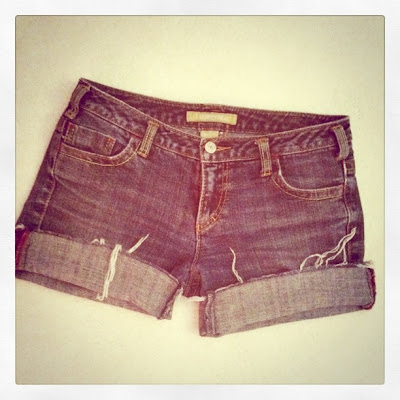 ...and folded the top down just an inch so the fringe hung down. 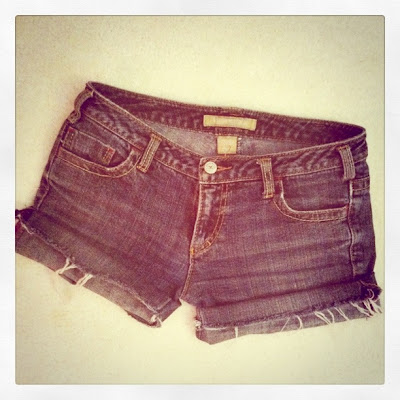 It's kind of a marriage of the cuff/cut-off denim shorts.
Hey, it's something different. Something free. Something resourceful.
Something cool.
2. On the Fringes
I bought this shirt at Pacific Sunwear back in the beginning of spring for $7. 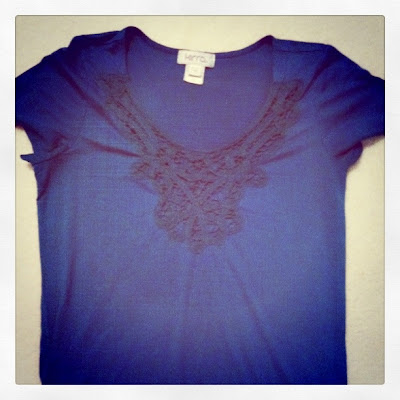 I liked the color and the applique but realized the shirt never came out of my drawer. Why? There was something missing that I couldn't put my finger on. And then one day, it came to me. What it needed, was fringe. So, the scissors made a return and valiantly sliced up the bottom of the t-shirt, and voila.... 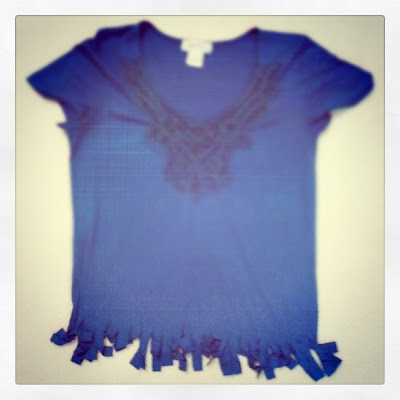 I wear this shirt all the time now with my cut-off denims.
Survey your plain tees for some fringe potential!
3. Ms. Mix-a-Lot
I bought this simple pretty summer dress from H&M last week, $12. 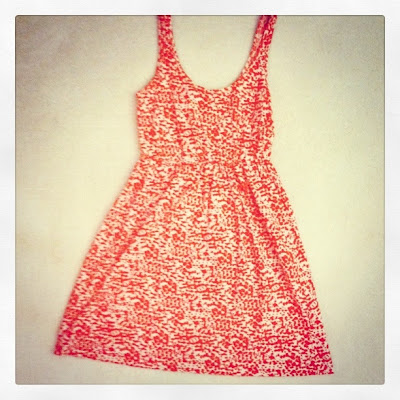 It's a little long than I'm used to (slut!) but figured it would be useful for work and play. I didn't have a good cardigan/clothing complement to the dress which made me instantly regret tearing off the price tag for fear I had made a poor wardrobe purchase. But without much thought, I decided to try on a light striped V-neck cardigan over top that I bought from Forever 21, which is unconventional of me as I don't usually mix patterns. 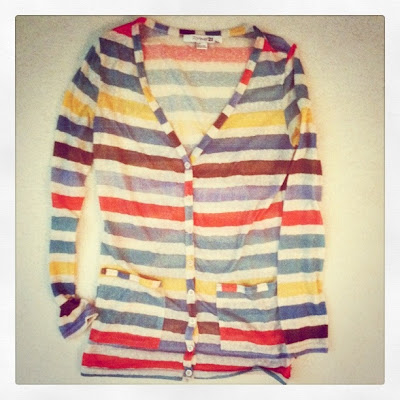 But, it proved to be a good move, in my humble opinion, no?
The coral color in both ties it together nicely. 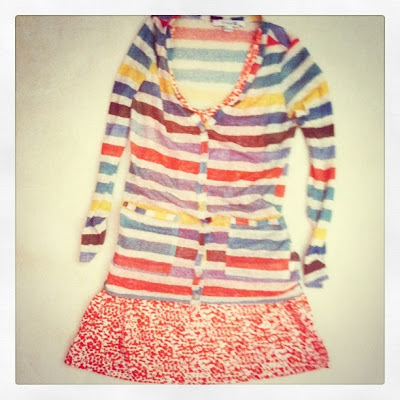 Right now, I only have a pair of gold sandals and accessories to dress it up (see what I did there, I used "dress" as a verb to talk about the noun "dress") but I imagine this outfit would be adorable with some chunky wooden heels or wedges. Add a fun belt or a string of gold necklaces, and ay mami! Like buttah. But, I won't be purchasing any new shoes in the near future so my modest $3 Old Navy sandals will have to do.

So, there you go. My first and probably last stab at dishing fashion tips (from the girl who wears the exact same thing every week). My friend Mandy would probably tear this blog apart (she's the true fashionista) but then again, I don't go around thinking t-shirts that are $150 are "practically free".

Ah, Kimi. You've done it once again. Not only was I glued to your blog and laughing my head off (wait, why aren't you world famous again?),but I learned some important fashion tips. I've just gotten into mixing patterns, even though everything I own is either solid or striped... but once I can buy clothing again, I'll remember your fashion advice.

I was also laughing my head off... that is some genius self dialogue. And as someone who lived in the same house as her closet, I so appreciated the Manders quote. Well done!